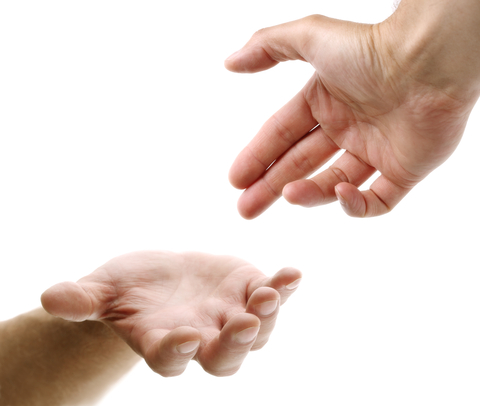 I told Annabelle that I appreciated the way she brought herself to life, and to relationships. This was a place of mutuality, a place we shared values. So I also talked about myself, including the places I found a discrepancy between my values of authenticity and being of service, and then my own needs and limitations.

Annabelle spoke of how she could give to others in her role, but it was harder for her to take in. She then shared that she derived little pleasure from food, and had to force herself to eat.

Although this represented a very large set of issues, related to the field (food is very much related to family and relationship growing up), I wanted to keep a focus on the therapeutic relationship.

So I suggested an experiment where I do something nourishing for her, and she practice taking it in.

So we held hands. I slowly stroked her hands with my fingers. She started to do this back, but I stopped her - this was her tendency to give rather than receive. The direction I gave her was see if she could take in some nourishment and pleasure.

As I did this, she reported not being able to take in much - her arms were stiff. She also bit her lip, and was aware of doing a number of things to block taking in some nourishment from me.

So, holding her hands, I slowly lifted her arms up and moved them around. I asked her to let go of control, relax, and let me do this. She found it very hard, holding on stiffly, and trying to follow my movements, rather than let me direct her.

We did this for some time. She was able to let go a little bit, and as she did, she could allow a bit more nourishment in. But it was hard for her.

I gave her the homework to find someone else to practice this with.

In terms of ongoing work, there would also be a number of ways I would take this forward - exploring her resistance to letting go of control, as well as her unwillingness to take in nourishment. We would address whatever family issues were related to this, including the place of food in her household.

Anytime we hit ‘resistance’ in Gestalt we do not push through it - instead we respect it. We look for the context - the original situation which engendered the ‘creative adjustment’. We look to appreciate this creative adjustment, to understand it, and to treat it positively. In this way, I could find out how how important it was for her to stay in control, what was at stake for handing over some control, and trusting. It’s likely to become clear that trusting, letting go, was not a good idea in her original/family context. So any new experience with me would need to be taken very slowly, appreciating just how risky it is. It’s better to work very slowly, in a way which can be integrated - so the experiments would need to keep this in mind.

We could also experiment with having some food in the session - for instance, slices of apple. And do an awareness experiment to do with eating it, noticing the detail of the experience. Rather than ‘talking about’ behaviours, we are always looking to explore them in the session itself, with awareness and support.