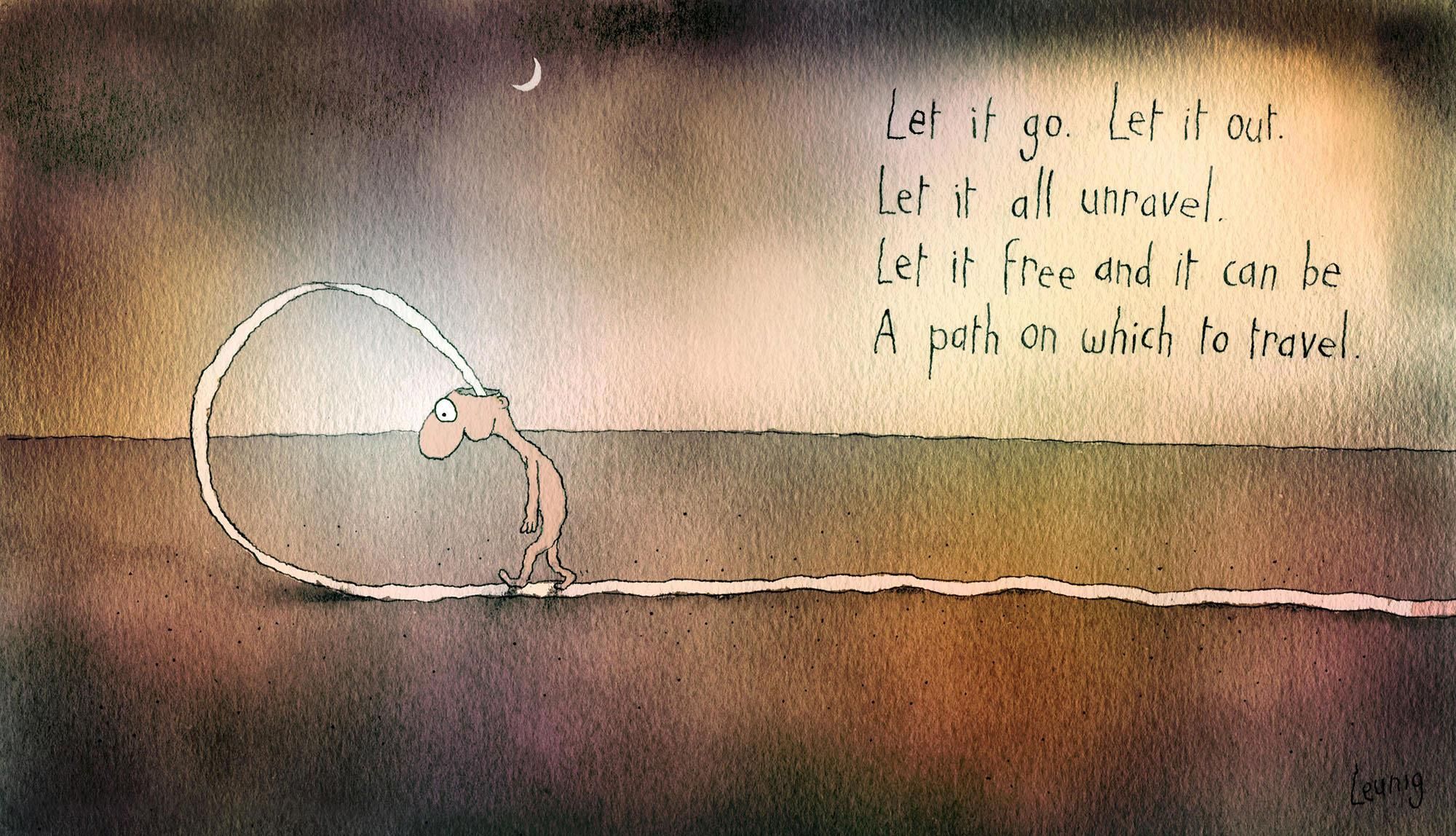 Betina talked about being afraid of her husband dying - there was a history of early deaths in his family, a fortune teller had told her he could die, and he stayed up late each night. As we spoke, it became clear that the issue was that he neglected her - staying out very late each night, drinking and gambling with his friends; when he came home, he was noisy and inconsiderate, waking her up. He spent little time with the family, and had lost family money on his gambling.

This had been going on for most of their marriage, for several decades. With family systems that have an abusive element, and continue for some time, there is a co-created aspect of the dynamic, which is usually related to context in the Field.

At this point, she was angry, but they hardly talked with each other.

I pointed out that along with feeling pain if he died, she would probably feel relief. She agreed. In Gestalt we are interested in both ends of a polarity.

I asked what she would like from me - she said some direction as to what to do.

She also revealed that her father had been similar - staying out late at night, gambling. That's the field indication.

It was clear to me that this was a serious, entrenched, and very debilitating situation. Her husband confided in her sister-in-law, who then criticised Betina.

As she was talking about this, she was pinching herself. So I invited her to ‘pinch’ her sister-in-law, and put a pillow in front of her. She was very reluctant, pinching herself harder. I was a bit pushy - insisting that she try the pillow - pointing out it was ‘just a pillow’ and there would be no repercussions. This was difficult for her, but she did it, sinking her fingers into the pillow. This is what we call a ‘retroflection’ in Gestalt - doing to oneself what you would like to do to others.

I invited words as well. But she then revealed it was also his other siblings who would meddle and criticise her.

So I stopped the process. The whole process revealed entrenched powerlessness, lack of support, and an intergenerational pattern that had qualities of an abusive relationship. This was not something that was going to be solved by my giving simple directions like ‘just don't do it’. And the amount of support required to step out of this seemed huge, and unrealistic to attempt in a single session - it’s important to recognise our limitations as therapists, and to not attempt to do something that gives false hopes.

So I increased her awareness by going the other direction. I asked her if she thought all men were selfish, but she said she thought not. I then shared that I thought men were a bit selfish. She said, “well, I let it happen." In this way, she stepped into taking some responsibility, without me having to ‘confront her’.

I looked at her, and told her I could see how unhappy she was. It was a moment of meeting. I did not want to try to rescue her from that place or fix anything - as much as, of course, I wanted to see a different life for her.

Highlighting the depressing nature of the situation was a way to not downplay it. I did not comment or judge or suggest, just acknowledged. In this way, I could see her, and I sit alongside her, looking at the reality of how things are.

We call it ‘sitting with the creative void’ in Gestalt. It doesn't seem creative, but by sitting with it, without falling in, or running away, something else can emerge.

She said, “well, we have stopped talking, and it’s a bit of a relief.” I got it - and pointed out, that in fact, the marriage had already died. So, what now?

I asked what percentage she thought there was any hope of change. I was expecting something extremely low. If she said zero, I would have worked with her on how to get out of there.

But she surprised me by saying 15%. This indicated there was a chance that things could change.

I asked her what that would entail her doing - here was the entry to some possible action. She said that she could find ways to be happier. That was good - a subjective solution to start with.

When I asked for more, she said she could focus more on the kids, but I pointed out that's what she did already to cope with the marriage.

She identified some other ways she could make herself happier. But I wanted more from her - some objective actions she could take to change the relationship.

She said that he complained that she never made him breakfast anymore. So, he clearly still wanted some care, and missed it.

So I asked her what quid pro quo she could ask for, if she made him breakfast. She said, time with the family. This sounded like a good start - not too intimate, but a signal of something different. I asked her to quantify how much she wanted and how often. I then suggested she could offer to make him breakfast that number of times.

I outlined to her that if she was to create a new relationship out of the ashes, it would take several years, and she would need a great deal of support in the process.

In Gestalt, we are satisfied with one little piece - integrated - at a time.

In this case, something emerged from the void, and it was all her doing, rather than resulting from her invitation to tell her what she should do. My ‘direction’ was to direct her attention to firstly the ‘what is’, and then, to help ground her in the emerging figure of what she did have energy for.