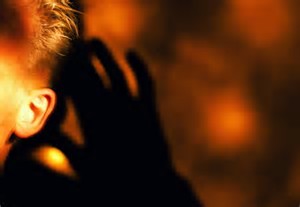 Each time Mabel spoke about her spirituality, she reported feeling some turmoil. She said she was tense in the stomach. Mabel had not previously been religious, but of recent years had joined the church. There were many things she appreciated, and valued about her newfound religious experience. But there were certain dogmas which she couldnt and wouldnt accept, and these troubled her. This included a negative view of sexuality, and a damning of homosexuality. Her brother was homesexual, and this felt like too much of an affront to her. Yet, she did not want to let go of her spiritulity. So I invited her to have a 'conversation' with a priest. We pulled up a chair for the priest. She told the priest how she felt, and what was true for her. When she took the role of the priest, his response was superior, and dismissive. I supported Mabel to stand her ground, to clearly identify her boundaries and limits - what she would not swallow. The conversation went on back and forth, with the priest sticking to his guns, and she to hers. It seemed unresolveable. I then pulled up another chair for 'God'. I asked to her sit in that chair, and 'talk to Mabel'. 'Gods voice' said - 'have compassion, and accept him [the priest] as he is'. This seemed to be a circuit breaker. Mabel, back in her own seat, was now able to say to the priest 'I disagree with you. I know we will never come to an agreement. I accept that, and respect our differences. I accept you are doing the best you believe, with your sense of God, and I am doing my best, with my sense of God.' Back in the priest role - the response was agreement. As Mabel finished this dialogue, she report feeling greatly peaceful. The inner turmoil, that she had been struggling with for some time, had gone. She felt a genuine resolution and clarity, and a truly spiritual way to deal with this intractable conflict. She also was able to keep intact her spiritual faith, and in fact felt renewed energy for moving forward. By doing this, she claimed her own spirituality, whilst being able to remain in relationship with the dogmatic aspects of the church. This is an issue many people face. Gestalt allows us to find a higher order resolution, without giving direction or advice. In the realm of spiritual issues such as this, it is enormously useful as we are able to use the therapuetic process to support people's spiritual journey.Posted by Steve Vinay Gunther