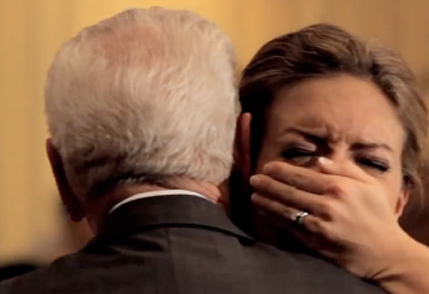 Nancy was wearing an outfit I really liked. It was made of soft, natural-looking materials; the design was muted, complex and unusual. The style was a little bit traditional Chinese. So that’s the first thing I noticed about her.

I told her so. I put it in terms of my experience looking at her clothes - what I felt and experienced. She told me she was a clothes designer, and thus she had designed this outfit. I told her I felt very comfortable with her designs and really liked them. So I wondered whether that meant that I would also be comfortable with who she was. Nancy seemed very nervous. Her hands shook a little. She didn’t say a great deal. She said she felt nervous, with me looking at her, and wondered what I was thinking. I explained that beyond my positive judgments about her design taste, I was just interested in being present with her, and letting things evolve.

I invited her to ask me some questions. She did, and I shared something about myself. I did this because I wanted to take the spotlight off of her. Her nervous state indicated to me the possibility of shame - especially indicated by her wanting to know what I thought. But rather than telling her more of my thinking, I moved to a greater degree of vulnerability, giving her the chance to find out from me what she wanted. Nancy was concerned about what was going to happen next - where this was going. I told her, I was not concerned. I was comfortable not having an agenda, and not knowing what we would work with, or how we would do it. This is the Gestalt way - to not operate according to a plan, to be present with what emerges. Nancy relaxed a little.

In fact, she said that she realized how little she was actually present in a relationship, most of the time. We sat there, in silence, for a minute. Then she said that I reminded her of someone. Her father. She explained that she had not really connected with him, not spent much time with him, avoided contact with him generally, and when he was dying, she mostly stayed away. She said how bad she felt about this, guilty, sad. I invited her to either talk to her father on a chair, or I could role-play him. She elected for the latter. So, I invited her to tell ‘me/father’ whatever it was that she really wanted to say, but couldn't before. She immediately knelt on the floor in front of me, held my hands, put her head on my hands, and started crying.

She asked if she had to use words, or could just say things in her mind. I asked her to use words. So she started talking about all the things she was sorry about, regretted, felt bad about: staying away, making excuses, not being there for him when he died, etc. She was crying deeply, saying all this. She asked for forgiveness. The role of her father I told her that one thing that was important was that she forgive herself.

I told her that I could see a great deal of pain as she spoke. I told her that I also felt pain in her behavior. And thus, the pain was shared. I also told her that, as her father, I was a little bit more responsible for the pain in our relationship, and that she must have been carrying some of it on my behalf. This comes from the Family Constellation understanding of the greater responsibility of the parent for burdens. I told her that I would carry my own pain, and what mattered to me was her finding her happiness. This touched her deeply, and she let go a little.

I also said that for her to stay away as she had, she must be feeling something like anger. She denied this. So, either she was not in touch with this, and it would be explored in later therapy, or something else was going on in the system that masked this anger. However, this was enough for now, and I noted the issue for another time.

She felt much lighter - she had let go of something. She felt much strengthened. And she felt much more connected to her father. Classical Gestalt uses the empty chair to do this kind of work. But I prefer to play roles myself, as I can then enter more fully into the client’s world, and participate more actively in the Gestalt experiment. Although there was clearly a context to her distancing from her father, it is important in a Gestalt session to just tackle one thing at a time. To try to attempt too many leaves insufficient room for integration. We are more interested in what can be integrated than by covering a lot of ground.