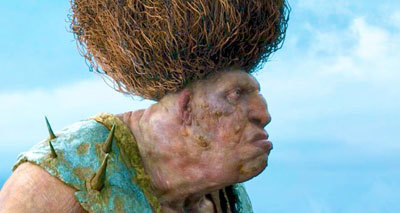 Julieanne talked about having ‘demons’. She said she wanted to exorcise them. Now I don’t ‘believe’ in demons, but I do accept that this was her meaning framework. In a Gestalt-phenomenological approach, we want to understand the clients reality, from within, rather than using external reference points. So I wanted to know just what she meant by ‘demons’ and by ‘exorcising’.

She explained that she visited a psychic/Tarot reader, with a friend. The psychic told her, 'you have not come here to support your friend, but it’s you who needs help. You have demons. They need to be exorcised.’ The psychic person did some rituals in relation to this. But Julieanne couldn't sleep very well after than. The exorcism had not ‘been successful.’ I told Julieanne, “we all have demons.” I talked about some of mine - what I call my ‘axe-man’. That is, the part of me which is destructive to others.

It was very helpful for her to hear this, for me to talk about that part of myself. I explained to her that from a Gestalt point of view, we never ‘get rid of’ our demons. Rather, we need to become interested in them. So, I invited her to do an experiment to bring one of her demons out..to bring it into the room.

So she described one which she said was a Giant. I asked what it looked like - she said it had a gnome’s face. I asked her to look at the Giant. She said that he was turning his head - he was shy!! She wanted to ask him a question. But in Gestalt we always encourage people to make statements - it’s more representative of self, and facilitates dialogue better than questions.
So she said,“I see you are shy.”
He got angry.

I asked her to make a statement about herself - she was nervous. Afraid of him.
I invited her to tell him that.
They both laughed!
She was still nervous however. I asked what exactly she was afraid of - this is important to move from global fear, to a grounded and specific fear - this facilitates contact.
She started talking about her anger - when she gets angry she gets very strong, and is very scary.

I asked - “so will he be scared of you when you are angry?"
Julieanne said, “no, he will laugh.”
She was delighted. In fact, the Giant was availab le for contact in the place where she couldn’t normally find it, in her anger.
By allowing herself to experience this ‘demon’, she was able to encounter the ‘demon’ of her own anger, and at the same time, feel a meeting in that place, rather than something to be ‘exorcised’.
I asked how she felt - she said, “I am glad he is there.”

This is the integration, that is the result of a Gestalt process. That which was alienated, becomes part of us, in a way which makes it accessible. So her anger is no longer something to be feared, projected or disowned. It’s something she can even laugh about, feel lightness about. This is true of all the things that people want to ‘get rid of’. In Gestalt we are always looking for contact, ownership, and appreciation of those parts, no matter how ‘demonic’ they appear.