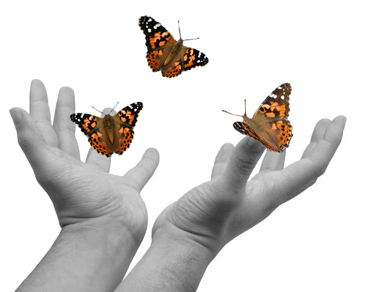 Sally had reported a number of symptoms - a feeling of chaos, some pain in her upper back, and the experience of blushing, which she connected to fear of a lack of acceptance. I asked her about these various phenomena. She was looking at me intensely. Generally that indicates the client wants something from me. I asked her about this, but she didn’t know.

As I was talking with her, I had a sense that there was a parallel conversation going on - our words, which didn’t really seem to connect much, and the emotional tone, which seemed intense to me, but unclear.
She reported feeling foggy.
I also told her I felt foggy.
She had nothing in her thoughts.
But there was a lot of feeling expressed in her eyes, though I could not tell what it was, I simply acknowledged what I saw, and my own experience. This is called phenomenological reporting. Her back felt hotter.

So I put my hands on the place it was hot. She reported it was very tight and I could feel this. I didn’t massage, but just felt into the tension with my hands, so I could get a direct sense of exactly what she was talking about. Again, I want to enter into her phenomenology as much as possible. I said, 'it seems as if you are being attacked from behind'.

She talked about her father smacking her as a girl, quite a lot. It was ‘normal’ smacking, but what was disturbing was she never quite knew when it was coming, so it was a shock. I then applied some pressure on the spot on her back - just direct steady pressure - this is known as ‘taking over’ in Hakomi therapy - parallel to the kind of intensifying of experience which we do in Gestalt; the result was she was able to relax a bit. There was still a lot of emotion in her eyes, very intense.

Then she reported that both parents made her wrong - consistently putting her down, calling her ‘stupid’.

This was clearly the key.

So I used my therapeutic authority, and the connection we had built up, to ‘remove’ those burdens from her shoulders, and tell her I was ‘taking away’ the bad words - stupid etc, and replacing them with good words.

While we generally are oriented around responsibility in Gestalt, when it comes to shame issues (indicated by the blushing, the lack of self acceptance, and the being made wrong), a person may experience themselves as somewhat powerless. So they may need help from the outside - therapist, or group, in order to experience enough support to move out of the place they are stuck.

This was the support I provided, and she was able to take it in. Support comes in many forms; the issue is finding just the right kind of support the client needs, in the right degree, and delivering it at the right time. This requires setting aside our 'helping' agenda, and being closely tuned into the client's needs. It also involves being willing to be present, and notice what occurs for me, as that also helps guide my choices.