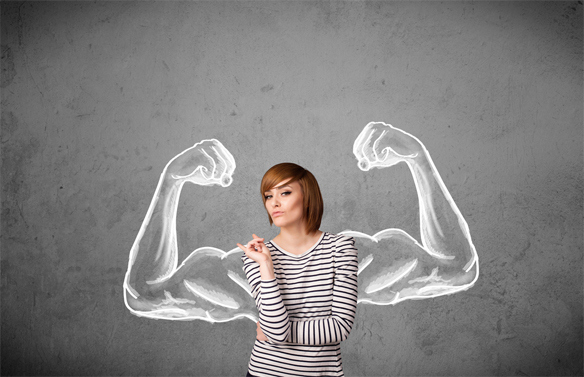 Kirstie was in a domestic violence relationship She grew up in a large family; even though her father was away working during part of her childhood, her memories were basically good. Her husband came from a military family. His father had beaten his mother. His siblings had various problems, including addictions.

Her husband was insecure and controlling, limiting how much she could go out of the house. Yet, he had had several affairs

The violence had occurred on a half dozen occasions, but the last incident was fairly recent, and the police were called.

She wanted to separate, but he refused, backed up by his parents.

She told him if the violence occurred again she would leave.

Of course, there was lots of emotion as she was relaying her story.

One of the contraindications for therapy is domestic violence. Whilst therapy can be useful to help empower the person in the victim role, it can in some ways make things worse - as the person becomes more independent, the violence may increase, as an attempt to impose control.

I pointed out that she probably had plenty of suggestions from her girlfriends, and that if I was to suggest something to her, she would probably ignore me. She smiled, just faintly, and I knew what i was saying was true.

I tested this out. I asked her point blank - “if he beats you again, will you leave?” She paused, baulked, started to cry a little, just faintly shook her head.

This was confirmation that something much more profound was required.

So I wasn’t soft, compassionate, understanding, or supportive. That would involve being pulled into a ’sympathy’ position, which would not ultimately empower her.

I stepped into my authority role, and told her - ”there is only one thing you can do.” Now, usually I eschew my authority role, in preference for dialogical communication, or bracketing of myself, to explore the client's reality or their values.

If we had more time, this may have been useful.

But theres very realistic dangers at stake in a domestic violence relationship, and my orientation is more practical.

So I used my authority for dramatic effect, to confront her, and to test out her readiness to truly do something different.

I used polarity theory in Gestalt - the existence of any one polarity, always implies the other.

She was identified with the victim/powerless/nice girl.

So I said - "you will have to become like your father in law - a military man.”

I spoke in this way, to use the language of authority - which is in one sense what she was used to responding to, but I was using for benevolent purpose rather than to hurt her. I picked up a statue of a patriarch looking guy, and put it in front of her. I directed (notice the authority again) her to come and stand behind the statue, and to ‘become him’. All this authority is setting her up to step into that energetic realm. I asked her to imagine she were a military man. An officer who commanded thousands, sent them into battle. Who was obeyed absolutely, who gave orders, who was willing to sacrifice the lives of others. She of course found it difficult to occupy this role, but I kept focusing her, showing her how to stand, giving her mental images. At one point she said “but my father in law is very unhappy.” I said - “this is not about happiness, but about power. It’s about you stepping into a role of power. You don’t have to stay there, just as long as is necessary, then you can go back to being your nice and caring self.”

I explained how in that role, she wouldn’t care about hurting others in her decisions. This sounds like setting someone up for destructive behaviour. But in fact, for someone like her who is identified with their powerlessness and ‘caring’, they need a way to step out of so much ‘caring’ for others, and into a place of ‘not caring’, so they can act with power to defend themselves.

The one thing her husband was afraid of was her leaving, and that’s the one power she wasn’t really willing to exercise. To do so would hurt him. So this is an example of a ‘strategic’ skill, skills which are necessary in life and relationship, just as much as intimate skills are.

She was able to hold this position briefly, then started crying. So I asked her to sit down. I explained to her that the things she wanted - better communication, safety, were secondary effects. The first one was finding her power. Without that, there were no bottom lines. She had an identity as a nice person. To move out of her situation she would have to learn to take on other identities - in this case, the military commander There may be people who object to me using such violent images. But the irony is, until she could own that ruthless and violent part of herself, she would not be able to truly stand her ground, and be willing to leave him. Until she was willing to do that, she would ‘adjust’ and put up with anything - probably for a long period. It can take a woman many years to leave a domestic violence relationship.

So I explained to her that she needed to practice this identity every day. To remove her jewellery, to wear masculine clothes when practicing. To really find her authority and power. And then, when she was fully ready, to plan - strategically - a meeting with her husband where she would step fully into her power, and ‘lay down the law’. This is the kind of communication he was used to from his family, and would potentially earn his respect. It would only be after she was really willing to leave him (i.e. hurt him), step into her power, and deliver him this message, that anything could change. She agreed.

So in this case, power came first, and everything else came second. Therapy has to be flexible enough to take the approach that is necessary for the situation. To work with her feelings would be inappropriate, when the context was violence. It was necessary to go to that context, and to move her out of her own fixed position, to allow her to gain the respect - and obedience - of her husband.